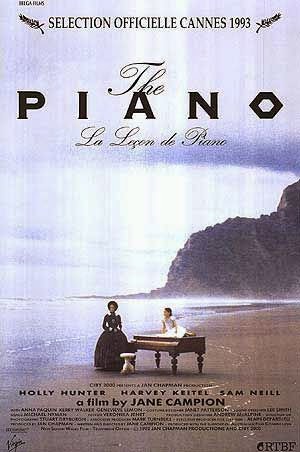 Ada: What a death! What a chance! What a surprise! My will has chosen life! Still it has had me spooked and many others besides!

Flora: How did you speak to him?
Ada: I didn't need to speak. I could lay thoughts out in his mind like they were a sheet.
Flora: Why didn't you get married?
Ada: He became frightened and stopped listening.

One visit for every key.

Ada: At night! I think of my piano in its ocean grave, and sometimes of myself floating above it. Down there everything is so still and silent that it lulls me to sleep. It is a weird lullaby and so it is; it is mine.

It is the mid-nineteenth century. Ada is a mute who has a young daughter, Flora. In an arranged marriage she leaves her native  accompanied by her daughter and her beloved piano. Life in the rugged forests of New Zealand's  is not all she may have imagined and nor is her relationship with her new husband Stewart. She suffers torment and loss when Stewart sells her piano to a neighbour, George. Ada learns from George that she may earn back her piano by giving him piano lessons, but only with certain other conditions attached. At first Ada despises George but slowly their relationship is transformed and this propels them into a dire situation.

Eva's review
The memorable sequence shot was when Ada with Flora and George reached the sea - one of the best pieces of work I've ever seen. The footsteps went: Ada, Flora then George. The piano shows Ada's feeling and it's the only way for her to express herself. (Ada speaks through sign-language)
However, when Ada leaves New Zealand with George, the piano, which was prerequisite now becomes a burden. It's Ada, who now insists that they should unload it. For her will, she escapes from the rope. Just like the piano, we all have an object that we cling to in our lives. But it's one's will to let it go and get on to the boat.
You know, our 'will' is so strong. It even speaks, it even get us out of the dead sea. It could accompany sacrifice, but it brings you to the place where you'll find your passion is. I learned that.
The background - 1890s in New Zealand is so interesting. The Maoris and people, how they live together really caught my eye. Especially the scene when the play surprised the Maoris, that was so hilarious. I bet you will also enjoy the film.